A new survey from Express Employment Professionals shows that job openings should remain high through the second quarter, with hiring particularly strong in the industrial sector.

Job openings in America hit a new record high in this month’s Bureau of Labor Statistics report, and a new survey from Express Employment Professionals shows that they should remain high through the second quarter, with hiring particularly strong in the industrial sector.
In an Express survey of businesses, 80 percent of respondents said they planned to hire in the second quarter. Thirty-nine percent said they plan to hire general industrial labor and 33 percent said they plan to hire skilled industrial labor, while 18 percent plan to fill administrative or clerical jobs.

“As the year gets going, many companies are ramping up staff,” he said.

“We are seeing less hiring than we did three months ago,” he said. “Several factors are driving this in our region, such as full employment after several months of strong hiring and another minimum wage increase in New York. We also have multiple companies that are seeing a business slowdown. Severe weather has also played a factor in our region.”

And while Janis Petrini in Grand Rapids, Michigan, sees “a bit of a slowdown” with companies not hiring “as aggressively” and things “leveling off,” Jill Loveless in Tigard, Oregon, says she is seeing “more” hiring compared to three months ago.

Petrini says that, even though hiring isn’t as aggressive, she wouldn’t expect to see our unemployment rate go up anytime soon.
The demand for workers is high in all regions, and Calabrese reports that as a result he is seeing more on-site job fairs at employer locations, increased signing bonuses and innovative mentorship programs. Petrini says she’s seeing more “collaborations around transportation” to get workers to locations not served by bus lines.

As Bernie Inbody puts it, America seems to have plenty of jobs. The country needs more qualified workers—and the latest BLS report is just further proof.

“The pace of hiring varies significantly by region, but the fact that hiring continues and so few businesses say their markets are ‘trending down’ is more encouraging news for the economy,” said Bill Stoller, CEO of Express. “It’s worth asking, how much stronger would our economy be if we could fill the 7.6 million jobs that were open at last count?”

The survey of 491 businesses, which are current and former clients of Express Employment Professionals, was conducted in February 2019 to gauge respondents’ expectations for the second quarter of 2019.
If you would like to arrange for an interview with Bill Stoller to discuss this topic, please contact Sheena Karami, Director of Corporate Communications and PR, at (405) 717-5966.

About Bill Stoller
William H. “Bill” Stoller is chairman and chief executive officer of Express Employment Professionals. Headquartered in Oklahoma City, the international staffing company has more than 800 franchises in the U.S., Canada and South Africa. Since its inception, Express has put more than 6 million people to work worldwide. 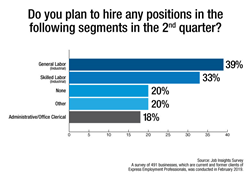